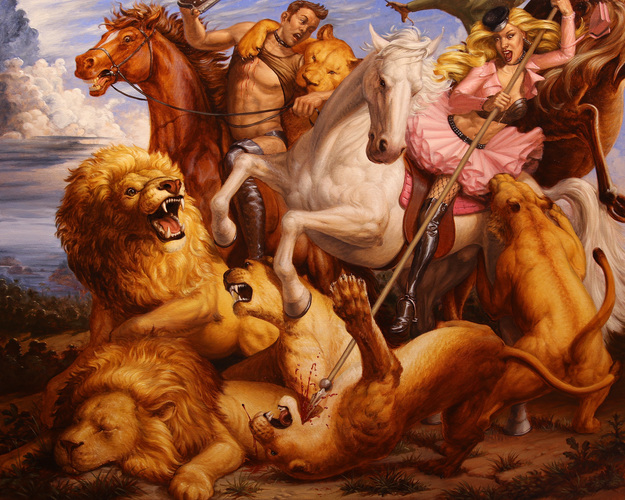 Diana and Actaeon: Backwards and in Stiletto Boots
2018
Oil on Canvas
48"x60"

Backwards and in Stiletto Boots appropriates the macho genre of hunting paintings by Peter Paul Rubens. In it I place Diana, goddess of the hunt, in a position of power and triumph, thus opening Rubens's all male world to women. This has obvious corollaries in todays society as women have and are making a place for themselves in formerly male dominated fields. Diana is an ancient archetype of a woman...a goddess...achieving and surpassing any peer in a field dominated by men. Another aspect of the work deals with fashion, and the fact that women's fashion tends to adorn at the expense of functionality. Therefore, like Ginger Rogers, women must do everything their male counterparts do, "Backwards and in high heels." The wardrobe selections are appropriated from the 2018 Moschino spring/summer line.